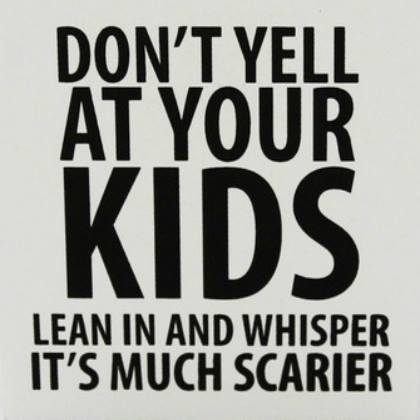 Constantly screaming and yelling at your kids is abusive, useless and stupid (if it was useful, you wouldn’t have to do it more than once). Most parents scream because they are frustrated; their buttons have been pushed and they feel like they don’t have any other options. However, the minute you lose it, you lose all the power.

You would think that screaming would make your kids fear you. It doesn’t.  As a matter of fact, it does just the opposite.  Kids lose respect for you when you start screaming and yelling because you’ve lost control. They know that the yelling will pass, or they become so frustrated and angry that after a while, they become immune to it and don’t take you seriously.

Now, just as all kids misbehave, disobey, talk back, ignore chores and fight with siblings, all parents are going to holler every now and then. However, you need to pay close attention to how you’re yelling. Blaming and shaming – “You’re a loser,” “You’re useless,” “You’re the reason I’m upset” – are very destructive, especially if the child is being told that he or she is responsible for the parent’s problem. According to The American Journal of Psychiatry, emotional abuse is the most significant predictor of mental health, even more than sexual or physical abuse. Here are 10 things you can do to stop yelling at your kids:

How Do You Support Your Child to Achieve His Goal?

Scream at Your Own Risk (and Your Children’s)