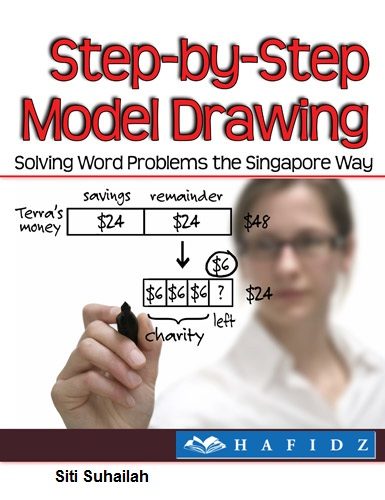 The following is derived from my eight years of teaching mathematics from Primary 1 level to JC 2. Somewhere in Primary Three problem sums that require the drawing of simple models begin to appear and in some schools, this happens in P2 and even P1. However, these problems tend to be simple enough so as not to cause problems for students who don’t draw models. Generally, parents report their children doing badly and losing interest in math in P4. This is because in P4, complex problem sums begin to appear. It also coincides with the appearance of Decimals. Thus students who have not mastered Fractions as well as simple models by the end of P3 will find P4 a tough and demoralising year, with some probably staying away
from Math for the rest of their lives. However, in P4, Section C (problem sums) still only take up about 20% of the marks, so pupils will still survive and scoring above 75% is not a problem for the hardworking student who is not careless.

However, this ecstasy is short-lived. In P5, Ratio, Average and Percentages start to appear, on top of decimals and fractions, and only the well-taught and discerning student will understand that they are all roughly the same thing in different forms. To add to the agony, Paper 2 in P5 takes up 60% of the total marks! It is a very big jump from P4; students can no longer afford to just concentrate on their short questions in order to score A*. P5 is the year that separates the men from the boys (or the women from
the girls). In P6 or PSLE, Paper 2 weightage is 60%, wiping out all remaining students who have not mastered complex problem sums and non-routine questions. That is NOT the bad news yet. The worse news is, the ecstasy of quite a number of students who scored A-star in math at PSLE is also short-lived (I have encountered quite a number of students doing badly in secondary math even though they scored A-stars or A’s at PSLE).

Why is it that some students can score A-stars or A’s at the PSLE yet become average or even failures in math at the secondary level? The answer lies in two words – Algebra and presentation. It’s unfortunate that even at the upper primary level, students are not taught to form and solve equations using algebra, and they are also not taught how to present their answers in logical and coherent mathematical statements. Thus I find that many Sec 1 students provide math workings that will not earn full marks by ‘O’ level standards, and these habits are hard to change. Inability to use algebra properly also means inability to master important fundamentals such as algebraic expansion, factorisation and manipulation, resulting in poor performance at the upper secondary and JC levels.

Whenever I ask an upper secondary or JC student to state the main reason why he thinks he’s doing badly in math, the reason given is almost always that he had difficulty handling algebraic concepts and formulae while in Sec 1 and Sec 2. Thus parents and students need to comprehend fully the importance of mastering algebra in the lower secondary years.

Even students who perform well in Sec 1 and Sec 2 may suddenly suffer a drop in their math performance by the middle of Sec 3. This is largely due to the full impact of Additional Math and the pure sciences taking place and finally being felt by students around that time. A. Math can be a shock to some students who are not used to algebra-intensive questions with solutions that are one-page long. Trigonometry in A. Math is also substantially more difficult to grasp than it’s counterpart in elementary Math.

H2 Math is more shocking to new JC students than A. Math is to new Sec 3 students. H2 Math is significantly more difficult than A. Math and from my experience, students who do not get an A1 for A. Math will have a hard time even in completing their JC tutorial worksheets. This is because on top of having to write out solutions that are often more than one page long, students have to familiarise themselves with a new graphical calculator. Many topics in H2 Math are also completely new to students, such as Complex Numbers, Series and Sequences and Probability Distributions, just to name a few. H2 Math is also difficult for most students because some parts of its topics are taken from the former subject Further Math, which was meant for only top students in Math. Thus it is not surprising to find many students failing in Math tests in their first year in junior college.

✩ My main point is – Concerned parents must monitor their children’s mathematical development extra closely when the kids go through the above stages.

Smart ways to discipline your child at every age