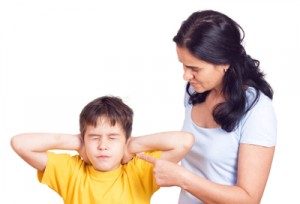 he thing about children is that sometimes they misbehave.

They disobey. They talk back. They ignore their chores and fight with their siblings.

Even the most patient parent can end up hollering. Indeed, yelling at children is so common in American households that most parents view it as an inevitable part of childrearing.

But in some cases, researchers say, yelling can become a form of emotional abuse. And children whose parents consistently raise their voices or combine yelling with insults, criticism, ridicule or humiliation may suffer from depression, dips in self-esteem or demonstrate more aggression themselves.

While physical abuse of children has been widely studied, child development specialists have in recent years begun to focus more attention on emotional abuse, which studies suggest can be equally harmful. In 2002, the American Academy of Pediatrics urged pediatricians to be aware of the risk factors of psychological maltreatment of children.

The academy’s report, based on numerous studies, said that “a chronic pattern of psychological maltreatment destroys a child’s sense of self and personal safety.”

Almost every parent yells at one time or another. A 2003 study by Dr. Murray A. Straus and Carolyn J. Field, published in The Journal of Marriage and Family, found that 88 percent of the 991 families interviewed reported shouting, yelling or screaming at their children in the previous year. Of the families with 7-year-old children, 98 percent reported having yelled.

In another study, not yet published, Dr. George Holden at the University of Texas and his colleagues followed 132 parents and their newborn infants over four years. Thirty-five percent of the parents reported yelling at their children before they were 1. By the time the children were 4, 93 percent said they had.

Not all children suffer as a result. Researchers say that content and context matter. The tone, what is said and the frequency can mitigate or exacerbate its effects.

“The difference comes in how the yelling is used,” said Bonnie Harris, a parent educator in Peterborough, N.H., and author of “When Your Kids Push Your Buttons: And What You Can Do About It.” “Is it blaming and shaming?” she asked. “If the child is being held responsible for the parent’s feelings and behavior, then the yelling can have a deleterious effect.

“But not if the parent is just venting without blame, saying, ‘I am really angry, I can’t stand this anymore,’ ” Mrs. Harris said. “You have just as much right to your emotions as your children do.”

Researchers are trying to codify the definition of emotional abuse while, at the same time, understanding more about its effects. A study in the July 2001 issue of The American Journal of Psychiatry that compared 49 subjects with depersonalization disorder with 26 emotionally healthy subjects, found that emotional abuse was the most significant predictor of mental illness, more so than sexual and physical abuse.

Dr. Straus, director of the Family Research Laboratory at the University of New Hampshire, said yelling could set a bad example for children that affects the way they handle social interactions later on.

“Yelling sets the tone for family relationships that carry over for dating relationships where you get a lot of psychological aggression,” Dr. Straus said.

Still, in the context of a supportive family environment, raised voices do not necessarily signal trouble, a study published last summer in The Journal of Emotional Abuse says.

“Other familial factors (particularly, having an emotionally warm and close relationship with at least one parent) appear to ameliorate the potential negative effects and also, to play a greater role in long-term psychological outcomes than yelling or other forms of aggressive acts,” Dr. Anupama Sharma, assistant professor of psychology at Eastern Illinois University and a co-author of the study, said in an e-mail message.

Some experts even say that yelling can be useful, teaching children about failures in a safe environment.

“Children have to understand that we as parents are not perfect and every once in a while we lose it,” said Dr. Bennett Leventhal, director of child and adolescent psychiatry at the University of Chicago. “It’s far better to understand at home that sometimes people get beyond their limit.”

But as most parents can testify, screaming at children is often not effective.

“Yelling overpowers children, it makes them feel frustrated and angry, and what can happen is that after a while kids become immune to being yelled at. They tune it out,” said Dr. Myrna B. Shure, a professor of psychology at Drexel University, who conducted a five-year study, financed by the National Institute of Mental Health, of children from kindergarten to fourth grade.

Jen Sayre, a mother of three from Rockingham County, N.H., said she hated yelling at her children.

“I feel so sad and out of control when I’m yelling and I’m mad at myself,” she said.

Mrs. Sayre does not yell often, she said, because she and her husband took workshops with Mrs. Harris to help them be more effective parents.

That was four years ago. Today, on the rare occasion that Mrs. Harris raises her voice, a child pipes up and puts her in her place.

“My kids will look at me now and say, ‘Mommy, this is your issue, you need to work on that,” Mrs. Sayre said. “I try everything I can do not to yell, but when I do yell, I apologize.”

10 Things to Do to Stop Yelling at Your Kids

The 7 Habits of Highly Effective Students