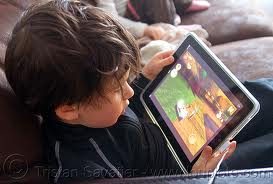 Son: “Mum, when you were four years old, did you ask your mother very nicely if you could play with the iPad?”

Me: [internal giggle] “When I was four years old, there was no iPad. In fact it’s only been around since you were a baby. Can you imagine that? What would you play with if there was no iPad?”

Me: [external giggle] “But what if there was no iPhone or iPad? What would you play with then?”

Of course, my son still does love to play with his toys. He’s an especially avid train fan, and will spend hours setting up various tracks, trains and collision scenes. Sometimes the whole family gets in on the train play.

His favorite drawings are trains, especially really long ones when he has the drawing space to pull it off.

I’ve seen it happen before with our older cousins’ kids, and knew it was coming, and wonder if our time is here too. Have we reached that age when technology trumps train play?  Are the gaming/video devices now the most seductive thing in the room? This day in particular, he’d been relentless about asking for the iPad. The day before he spent far too long on it. I was at my new job, and hadn’t set a rule with his grandma about how long he could play on the iPad after school. Plus he figured out how to turn off Airplane Mode, so instead of playing his mummy-sanctioned educational games, I found him watching YouTube unsupervised when I got home. Oii! (Interestingly, he was watching Looney Tunes, Power Rangers, etc, and then asked me if that were the cartoons I used to watch as a kid. Not so bad. Though I haven’t checked the history…)

Well honestly, he has not give up the iPad completely. I’m still looking forward to the day when he finally gave up asking for the iPad, where, he thoroughly entertained himself by looking at books, drawing, and yes, setting up more train tracks.

I’ve started to set my ground rules, create more activity time with him and schedules which keeps him busy. I’m glad I held my ground. After all, it is my job to set the limits and boundaries, and that’s just what I’ll keep doing.

How do you handle use of those seductive devices in your home?

Being Engaged in our Children’s Education: – “What is it you do in school today?”